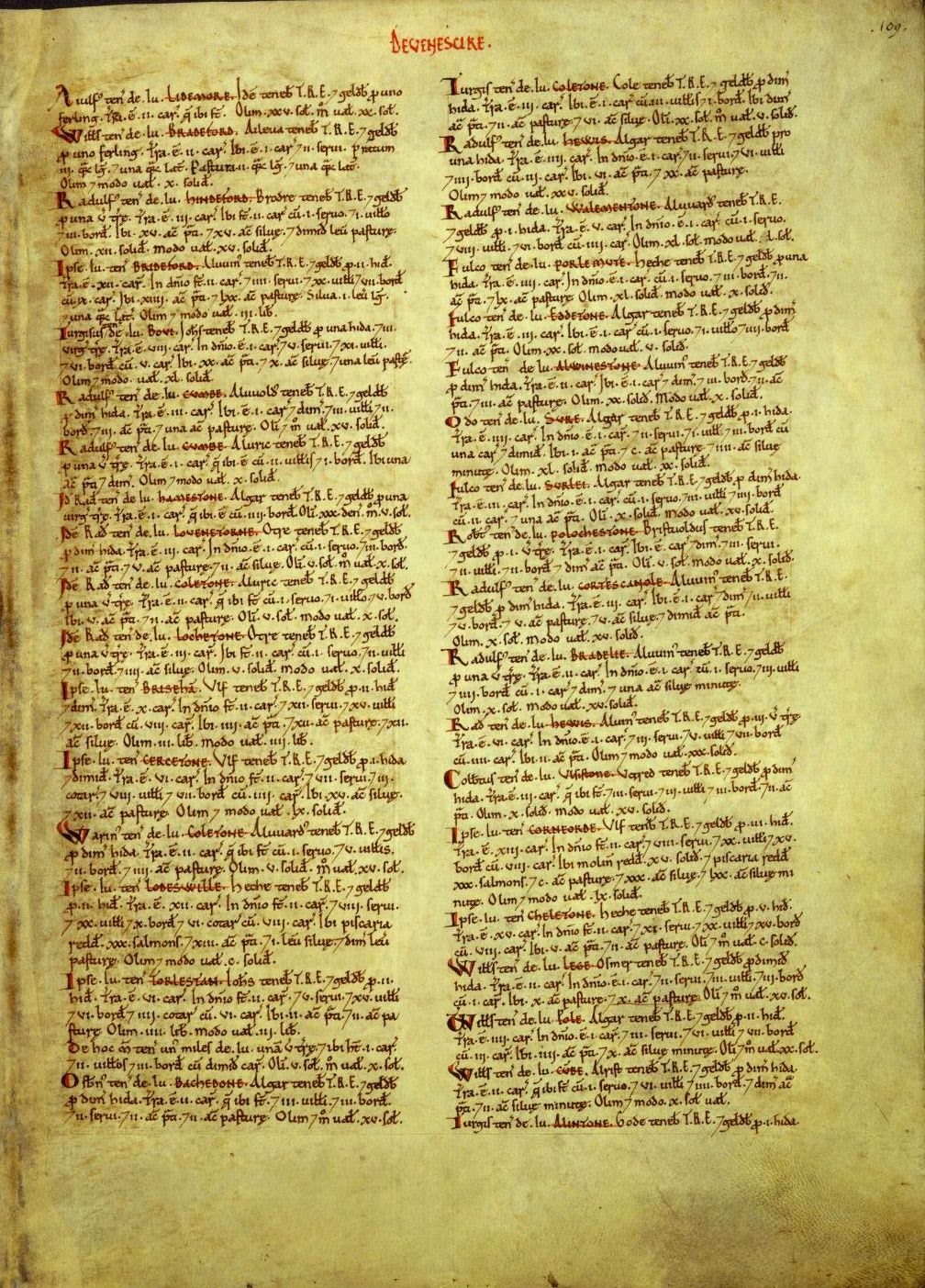 The Domesday Book, created in 1086, was a survey of the entire country to find out who had how much land and livestock, what all this was worth, and were there any back taxes owed.  It was written in mediaeval Latin.


“The book is metaphorically called by the native English, Domesday, i.e., the Day of Judgement. For as the sentence of that strict and terrible last account cannot be evaded by any skilful subterfuge, so when this book is appealed to on those matters which it contains, its sentence cannot be quashed or set aside with impunity. That is why we have called the book 'the Book of Judgement', ... not because it contains decisions on various difficult points, but because its decisions, like those of the Last Judgement, are unalterable.” [Richard FitzNeal (Henry II’s treasurer), Dialogus de Scaccario, 1179]


The Domesday Book Online is a fascinating website where  you can search for the relevant entry for your town or village of interest.  Here is the entry for South Pool (named as Pole), and beneath it is a transcription into modern English:

Transcription (in Modern English)
William holds SOUTH POOL from ludichael.   Algar held it T.R.E., and it paid geld for 2 hides. There is land for 4 ploughs.  In demesne is 1 plough, and 3 slaves; and 6 villans and 7 bordars with 3 ploughs.  There are 4 acres of meadow and 10 acres of scrubland.  Formerly, as now, worth 20s.

William holds COMBE [in South Pool] from ludichael.  Alric held it T.R.E., and it paid geld for half a hide.  There is land for 2 ploughs, which are there, with 1 slave, and 6 villans and 4 bordars, and half an acre of meadow and 2 acres of scrubland.  Formerly, as now, worth 10s.

Glossary from the transcription
bordar = even lower than a serf (derived from the French for cottager) .  Only slaves were lower.
demesne = all land held by the king
geld = periodic land tax
hide =  Measurement of land for tax assessment. Approx 120 acres.
T.R.E. = tempora regis Eduardis, or 'in the time of King Edward the Confessor'
villan =  from villanus, a peasant

During World War One, the Domesday books were held for safekeeping in Bodmin Prison, Cornwall, and during World War Two, in Shepton Mallet Prison, Somerset.


Nearly eight hundred years passed before something similar was attempted: the 1873 Return of Owners of Land (South Pool entry currently being transcribed and will be uploaded to this site).